The Olympic time trail champion Annemiek van Vleuten (Movistar) attacked within the last three kilometer of the 11 km long climb to the finish at Norefjell on stage 3 of the Ladies Tour of Norway.
She dropped Ashleigh Moolman-Pasio (SD Worx) and took over the lead in the race in front of the last stage. 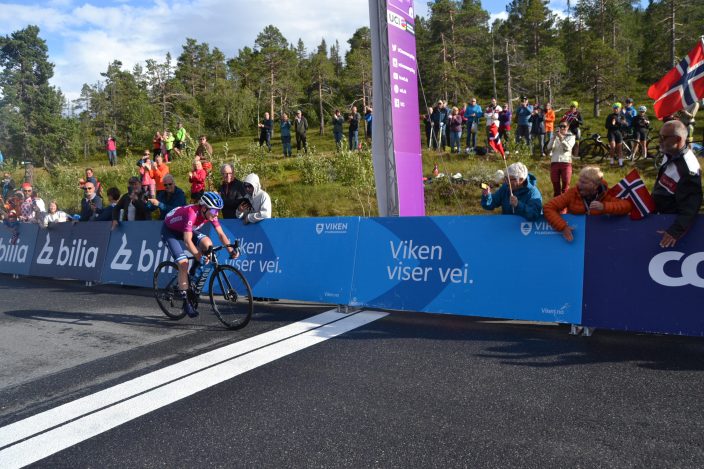 The big favourite waited till the last, long climb before they made any moves. The 145 km long stage from Drammen to Norefjell was considered the ”queen stage” of the race with an 11 km climb averaging 6,1% to the finish.

Brodie Chapman (FDJ) was the only attacker early on and she was later joined by the Norwegian champion Vita Heine. But they never gained a big gap and when the climb started it was firework from the first meter.

But it wasn’t until the last three kilometer the big favourite made the final move. On the step part to the 3 km mark van Vleuten dropped first Cecilie Uttrup Ludwig (FDJ) and then Moolman-Pasio.

The Olympic champion went on to win the stage by 35 seconds. Uttrup Ludwig was really tired and was also passed by the two Alé BTC Ljubljana-riders Mavi Garcia and Marlen Reusser on the final meters.

Riejanne Markus (Jumbo-Visma) lost 1,15 minutes in the yellow jersey and van Vleuten took over the lead in the GC. She is now 39 seconds ahead of Moolman-Pasio in front of the final stage to Halden on Sunday. This is a fairly flat stage and probably a battlefield for the sprinters.

Kristen Faulkner (Tibco-SVB) is holding on to the points jersey with a two points lead over Alison Jackson (Liv Racing), while Nina Buysman (Parkhotel Valkenburg) has a good lead in the fight for the Queen of the Mountains jersey.
New leader in the fight for the white jersey, best young rider, is New Zeelander Niamh Fisher-Black (SD Worx) who is holding a 29 seconds lead over her teammate Anna Shackley.

Here you will find complete results from the third stage.