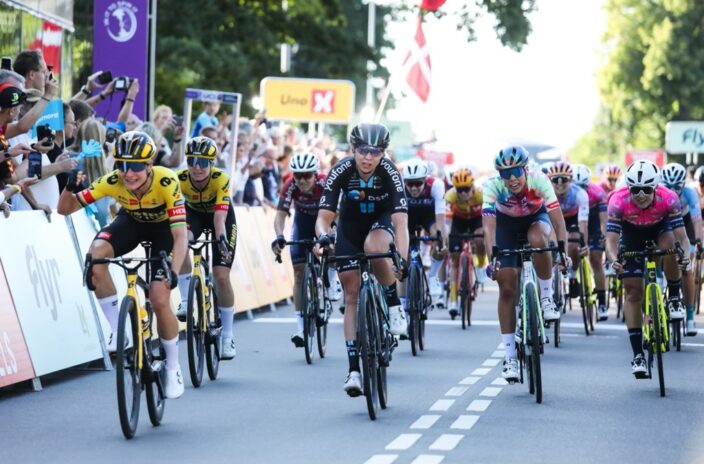 Marianne Vos (Jumbo-Visma) got the historical stage of the new Tour of Scandinavia from Copenhagen to Helsingør in Denmark.
The stages saw several attempts to break away, but in the end it was Vos who won a big bunch sprint again.

– I was a little bit afraid that I shouldn’t get a position for the sprint, said Vos who was not in the best position with 1 km to the finish.
– But I still had Linda Riedmann with me and she found the way on the right side of the road.

Jumbo-Visma also got the climbers jersey with Amber Kraak after good help from Marianne Vos who also spend some power here.
Canadian sprinter Alison Jackson (Liv Racing) is sitting in the green points jersey when Jastrab is the best young rider.
Amalie Dideriksen still got a prize as the best Danish rider after the 146 kilometers in fairly flat roades on the northern part of the island Sjælland.

Tour of Scandinavia witch is a new version of the former Ladies Tour of Norway is held over 6 days with 6 stages in three countries. On Wednesday the ladies will cover 154 km from Orust to Strömstad on the Swedish west coast.