Stage 1 through the Inner Østfold : Tougher than many believes

Friday’s first stage of LToN goes through the inner part of the region Østfold, starting in Rakkestad and finishing in Mysen. It’s 128 km long and probably heavier than you believe from the profile.

– I’m very unsure if we’ll get a big field together to the finish here, says project manager and announcer Kjell-Erik Kristiansen who has designed this course.
– The course has several short, hard hills – often coming quickly after each others. It makes it difficult to control the peloton. Specially the terrain from Spydeberg and back to Askim is undulating and here are some possibilities to break up the field, says Kjell-Erik. 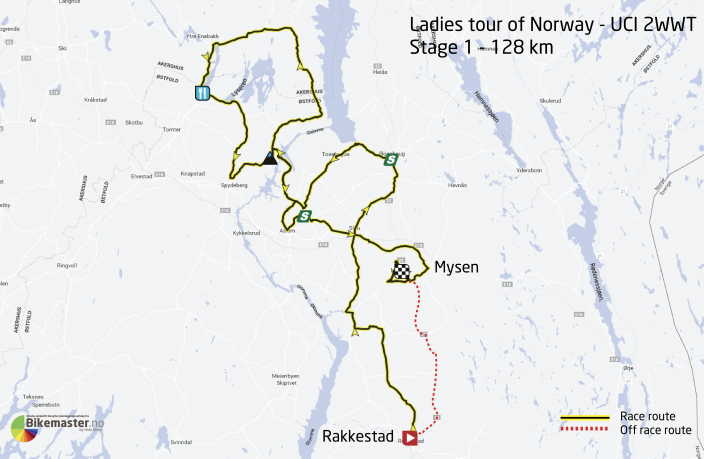 The start is in Rakkestad, the city once again playing a role at the LToN. The roads are taking the riders north passing Eidsberg kirke and Slitu. After 29 km is the first sprint in Skjønhaug in the community of Trøgstad.
After this the riders will continue in the direction of Askim, facing a hill up from Mønster bro. Before the center of Askim they’ll turn right towards Solbergfoss and after 5 km the field will cross the spectacular power station at Solbergfoss and Norway’s longest river Glomma for the first time.

The course is now taking a turn towards the region of Akershus in the north, passing Enebakk and coming back to Østfold at the feeding zone after 73 km. The riders will follow Lysernveien to Spydeberg.
From here it starts to go up towards the KoM at Skoro after 87 km. May be not the hardest and longest hill, but it can be a ramp for starting breaks on the tough roads to come all the way to Askim, where we have the second sprint of the day after 99 km.

From Askim it’s a quick run-in to the final circuit in Mysen where the riders will take on the same lap as last year. But this time only twice through the technical and demanding finishing circuit. The sprint is slightly in an uphill and last year it was the Belgian champion Jolien d’Hoore who won here. A crucial moment is to find a good position through the last corner before you hit the final straight.