These are the teams in Ladies Tour of Norway 2017

These are the teams in Ladies Tour of Norway 2017 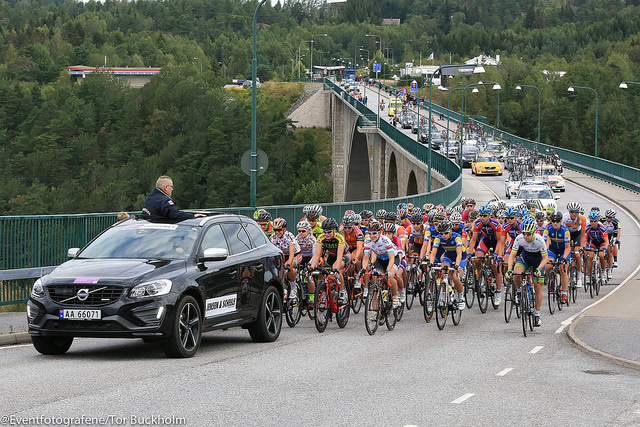 Here are the riders you can follow in this years edition of Ladies Tour of Norway. This is the first startlist with a comment for every team.
If you check out  the “team-page” here on our site, you can also see the jerseys so you you can distinguish them from one another as they fight it out on the roads in Østfold.

You will see world stars such as the newly crowned European champion Marianne Vos, the Danish World champion Amalie Dideriksen, the Norwegian Hitec Products team, and several of the world’s best female riders.

The prologue will take place in the center of Halden between 15:00-20:00 on Thursday. Stage 1 and 2 between Halden – Mysen and Sarpsborg – Fredrikstad are in the afternoon, and Sunday’s final stage from the old Svinesund bridge and Halden – with several kilometers in Sweden – is a midday stage.

It will be possible to follow the race live on TV and internet all over the world. We’re coming back with more info about this shortly.
You will also find more info here at LToN’s homepage (wwwbattleoft.wp.monsterweb.no).

These are the teams in this years race with their preliminary riders:

The world’s leading team for ladies is of course one of the favourites, even though neither of the two previous winners Anna van der Breggen and Megan Guarnier are in the line-up this year. But the reigning World champion Amalie Dideriksen from Denmark has been here before, and will get valuable help from the strong riders Chantal Blaak, Amy Pieters, Christine Majerus and Karol Ann Canual. The team recently won the TTT at the World Tour in Vårgårda; the team’s 23rd victory of the year.

Another very strong team, with Belgian sprinter Jolien D’Hoore as a favorite in massprints. The former double World champion Giorgia Bronzini from Italy (2010 and 2011) was 2nd at the ECH in Denmark and can be a rider in the top of the GC. Some of the team member have previously competed for the Norwegian Hitec Products team. Wiggle High5 has 15 wins so far this season.

Dutch superstar Marianne Vos is probably the biggest favourite to win the GC. She won the ECH in Denmark and participated in the first edition of LToN 4 years ago. Then she ended second after her teammate Anna van der Breggen.
Young Polish rider Katarzyna Niewiadoma is just 22 years old, but already she has won some stage races. Last year’s Dutch champion Anouska Koster won the last stage of LToN in 2016 when she – like several of her teammates last year – rode for the now dissolved Rabobank team. WM3 Energie has won 14 races in 2017.

Lucinda Brand won LToN last year and is now riding for a new team. Team Sunweb has had a fantastic season on the men’s side, and is strong also amongst the ladies. The sprinter Coryn Rivera from USA is not in the line-up for Norway, but we count on Brand as a name for the overall classification. To help her, Team Sunweb has another Dutch star Ellen Van Dijk. She is one of the strongest timetrialists worldwide. Team Sunweb has won 12 races in 2017, including Van Dijk’s gold in the European champs TT.

A very interesting team that sends a young line-up to Norway. Experienced stars like Lisa Brennauer and Trixi Worrack are missing, and so is the Brittish sprinter Hannah Barnes. But Tiffany Cromwell from Australia won the first stage of Thüringen Ladies Tour this year, one of 6 victories for the team so far in 2017.

The Australien team, which we also know from the men’s races, has no less than 15 victories so far this year. Dutch star Annemiek Van Vleuten, who crashed severly during the Olympics in Rio, is not here, but experienced Amanda Spratt is. She was on the podium in LToN two years ago. Sarah Roy has two wins this year, and Orica-Scott will for sure be up there at the stages in the Ladies Tour of Norway.

The German registered team has strong connectios to the North. World’s bronzemedalist Lotta Lepistö from Finland is a very intersting rider, she has been here before and we expect her to be among the best on some stages.
Young Danish rider Cecilie Uttrup Ludwig is one of the most talented riders in the world, and won the climber’s jersey in last years LToN. The 21 years old leads the WWT young rider classification and won the silver in the U23 ECH TT-race.
Swiss rider Nicole Hanselmann won the first stage in rainy Fredrikstad last year. Cérvelo-Bigla has 15 wins to date this year, of these Lotta Lepistö is responsible for five.

The Italian team has their best chances in the sprints with the Australian Chloe Hosking, also she with a past in Hitec Products. She is responsible for 3 of the team’s 7 victories in 2017, among them a World Tour-victory on the third stage of OVO Energy Women’s Tour. Experienced Romy Kasper from Germany transferred from Boels-Dolmans to Alé Cipollini this year, adding valuable routine to the team.

The American team relies on Dutch supersprinter Kirsten Wild, who last year was part of Hitec Products. She is one of the fastest sprinters in the world and won silver at the Worlds in Qatar last year –not quite happy for loosing the the sprint to Danish surprise Amalie Dideriksen.
Spain’s Sheyla Gutierrez is also a strong rider with three of the team’s 6 victories this year on her CV.

This is Bjarne Riis’s new, exciting ladies team. In LToN we will meet Linda Willumsen again, the former top rider who tried to finish her carrer after the Olympics in Rio 2016. Now she is back on track. The former Danish rider now represents New Zeeland.
Young Danish rider Pernille Mathiesen was recently crowned U23 European champion after a late attack on home asphalt in Herning. This is an exciting team with big chances in this years LToN.

Italian team where none of the riders in LToN having won so far this year. 37 year old superveteran Olga Zabelinskaya from Russia has Olympic medals and a lot of strong results. We hope to see some of her good old glory again this year.

Norway’s only professional team at the top level is lining up an all Norwegian crew. The biggest star for the locals is of course home grown rider Emilie Moberg. She was on the podium on the last stage the past two years. Vita Heine will show the Norwegian champion jersey and young talent Susanne Andersen has medals from both the Worlds and the Europeans championships the two latest years.

Belgian team with a strong influence from Italy, chasing their first victory of the year. Maria Giulia Confalonieria is a good sprinter and Alice Maria Arzuffi is a strong timetrialist. But the biggest star is the former World champion (2009) Tatiana Guderzo who moved from Norwegian Hitec Products after last season.

FDJ have an exciting team also among the ladies. Charlotte Bravrard is French champion of the year and Eri Yonamine won the Japanese championships. Experienced Sara Gillow of Australia came from Rabobank and has four Australian TT-titles on her CV.

Lotto Soudal is another team with both ladies- and men’s team on the highest level. However, the ladies haven’t won as much as the men this year and so far they are listed with just one victory. A big talent is the 21 year old Lotte Kopecky with several strong results, eager to take her first victory at World Tour-level.

A Brittish team with 7 victories this year, provided by Belgian Ann-Sophie duyck and Austrian Martina Ritter. None of them are in the line-up for LtoN however, and therefore it will be a tall order for the young team to beat the world stars coming to Østfold.

A Dutch team with Ukrainian timetrialist Hanna Solovay as the most prominent. She is a very strong TT-rider with one victory of the team’s two victories this year. 19 year old Aafke Soet is a big talent, she was second in the young rider competition in Tour de Feminin in the Czech Republic this year.

Another British team this year. They have some interesting riders, such as Hayley Simmonds who finishet third in Thüringen Ladies Tour, and should be looked out for in the GC. Lydia Boylan is Irish chamion of the year, and hence we will see another champion jersey in the field.

No other professional teams have four sisters in the same team. The Druyts family provides three sisters in the line-up for LToN this year. The all-Belgian team chases its first victory of the season, realising it will be a hard fight to get it in Norway.

The Italian team is of course still chocked after their teammate Claudia Crettis’s terrible crash during the 7th stage of the Giro Rosa. But the Italian girls in Team Valcar PBM keep fighting on and they are also chasing their first victory of the season.

Norway is one of two national teams in the race. This is an excellent opportunity for Norwegian riders not riding for Hitec Products or other top level teams to show themselves. Last year youngster Susanne Andersen was 2nd at the 2nd stage for the Norwegian national team. Maybe someone else rises to the occation this year?

Nice that Australia too provides a national team in addition to the professional team Orica-Scott. Some of these girls might turn up at the World championships in Bergen in September. In LToN they get a good chance to test Norwegian roads before the big clash on the west coast.