Marianne Vos (Jumbo-Visma) took her second win in two days at the new Tour of Scandinavia when she won the second stage from Mollösund/Orust to Strömstad in Sweden. After 153,8 km the Dutch superstar just outsprinted home hope Emilia Fahlin (FDJ Suez Futuroscope).

The race had moved from Denmark to Sweden and after a long transfer started in the beautiful costal village of Mollösund at the tip of the island Orust.
Yet again nobody succeded to break away despite several attempts along the Swedish West coast.

Jumbo-Visma worked double missions and Vos helped her teammate Amber Kraak to extend the lead in the fight for the Queen of the Mountains jersey. Kraak won both the hillsprints with her teammates from Jumbo-Visma blocking most of the other points.

Canadian Alison Jackson (Liv-Racing) kept the green points jersey despite a crash within the last 3 km.
– I touched a wheel of one of my teammates and went down. But I’m not hurt, said Jackson afterwards.
Also the young American Megan Jastrab (Team DSM) kept her whit jersey for the best U23 rider. But she was not able to follow up her second place from Denmark in the sprint.

Instead Emilia Fahlin looked like she had it until just a few meters before the line when Vos passed her.
– It kind of reminded me of 2018 when I was beaten narrowly by Marianne in the Ladies Tour of Norway on several occations, said Fahlin who is coming to form and is getting stronger and stronger after a long time with no big results.
Barbara Guarischi (Team Movistar) was third in the sprint behind Vos and Fahlin.

The Tour of Scandinavia is now moving to Norway for the last four stages who are quite similar to last years Ladies Tour of Norway, who was the name of the race earlier.
Thursdays stage from Moss to Sarpsborg is 119 km and also quite flat. Hopefully there will be some riders who are able to create som breaks and make the racde a little more interesting than the two first ones with more or less a compact peloton all the way to the final sprint. 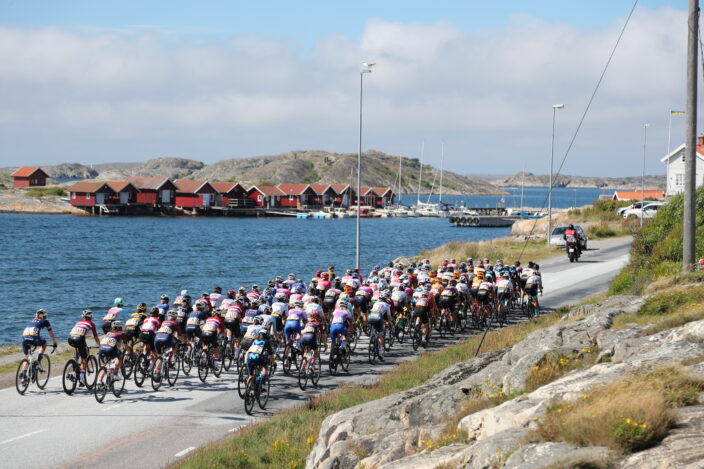