Here are the stages of Tour of Scandinavia

Here are the stages of Tour of Scandinavia

From Copenhagen to Halden – through Denmark, Sweden and Norway: 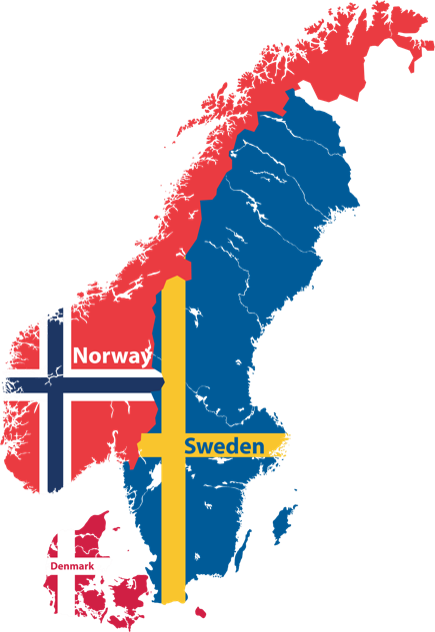 From the King’s Nytorv in Copenhagen to the harbour in Halden. Alongside the beautiful coast in Bohuslän, Sweden, crossing through the old region of Østfold in Norway, up the monster hill to Norefjell and following the lakes at Haldenvassdraget to the final. 958 km has to be ridden before the first winner of Tour of Scandinavia will be awarded in Halden on August the 14th.

The stages are built around the experiences from the former Ladies Tour of Norway and the rider will recognize some of the roads on the Norwegian stages.
But there are a lot of news, like the first stage at the island Sjælland in Denmark and the coastal stage in Bohuslän on the Swedish west coast. 6 stages through three countries is something totally new in the ladies World Tour.
The Queen stage will be the mountain stage to Norefjell with a 10 km long climb to the finish on the mountain.
But previous races have shown that the undulating stages in Østfold also can split the peloton. So with all the best riders in the world present there will for sure be 6 exciting and fast stages. 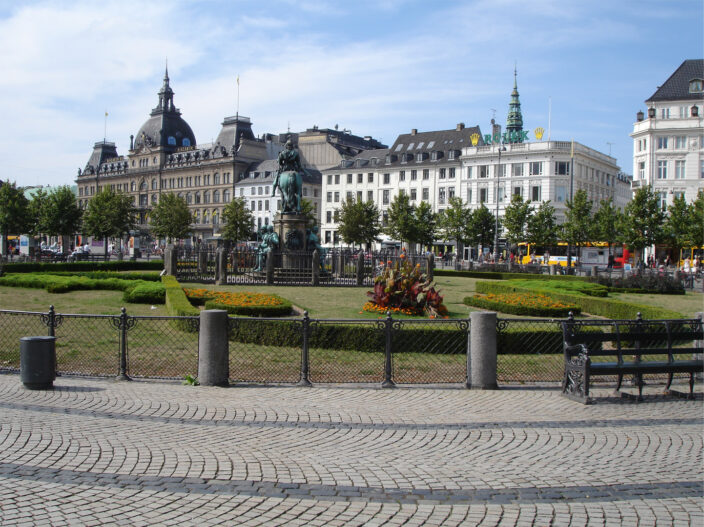 Start at the famous square Kongens Nytorv in the Danish capital. Transport out of town through the city center to the coast at Charlottenlund Fort and Charlottenlund Strandpark. Riding through Bellevue and Taarbæk til Jægersborg.
At Skodsborg the riders are turning west and inland at Sjælland. Crossing the highway at Nærum and then a round in Holte and around the forrest at Geels and Holtekollen. Then back east och north. Back to the sea at Vedbæk Strand by Kattegat and a second turn to the west at Vedbæk Havn. Crossing the road to Helsingør for the third time and later turning north on road 207 at Ravsnæs.
The riders will continue north west at Isterød and before Hørsholm Golf turning southwest and following the lake Sjælsø on the north side. Following smaller roads northwest before cycling along Store Dyrehav at Hillerød and entering the center of Hillerød.
Again northeast and passing Freriksborg Slot and the great gardens belong to the castle. Efter a few kilometers on road 6 the course goes through Sørup and passing Fredensborg Golf Club and just south of the great castle Fredensborg Slot.
Now smaller roads through villages like Jonstrup, Tikøb, Harreshøj, Havreholm, Villingrød, Esrum, Gilleleje, Firhøj and Hulerød before entering the final city of Helsingøﬁr through Hornbæk and Hellebæk.
The finish is just outside the DBU:s (football federations) traning field and Helsingør Tennis Club. The stage will be finished with three local laps.

A stage along the beautiful coast at Bohuslän, the inner filet of the Swedish Summer. The start will be directly by the sea at wonderful Möllesund on the island Orust. The riders will cross Orust on the way north and coming to the mainland over the bridge at Sundsandvik and the riding west of the city of Uddevalla.
The ladies will get in contact with highway E6 for the first time at Munkedal, but they are turning into road 172 towards the coastal town of Lysekil. They will see the sea again at Gerlesborg. Then they will follow the coast northbound through holiday resorts like Hamburgsund and Fjällbacka.
Next holiday destination is Grebbestad with Sportshopen, the biggest sports shop in Scandinavia. The last part will be inland from Tanumshede following the old E6 north all the way to the finish in Strömstad. The peloton will enter the border city from the south passing Daftö Camping, several times voted one of Sweden’s best.
The riders will turn right on the ring road not entering the center of the city. At cross between the ring road and Karlsgatan they’ll have a 90 degrees left turn before the 500 meters to the finish line just by the local sports stadium.
There are no final laps in Strömstad. 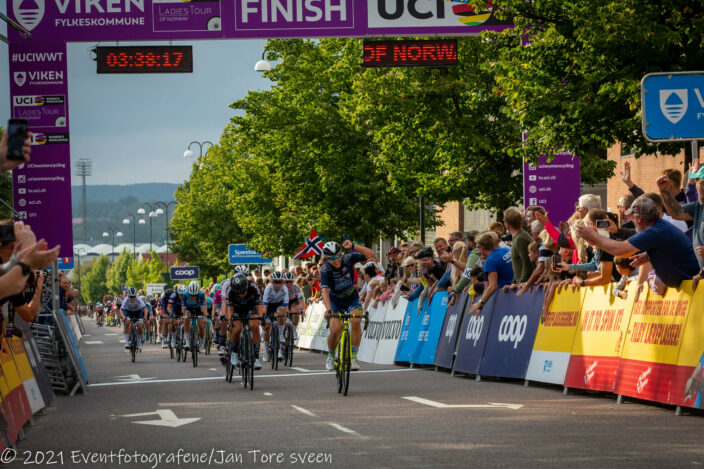 Back in Norway the riders will meet well-known roads from the Ladies Tour of Norway. Stage 3 will mainly take place in roads in the west and south parts of the region Østfold.
The start by the canal in Moss has also been used for the mens Tour of Norway earlier. The stage starts northbound passing Kambo and Son before turning east by Såner church and then further on to Våler in Østfold.
From here they’ll ride on road 115 to Svinndal and then south to Missingmyr in Råde where they again cross highway E6 and continues through the center of Råde and turning southwest to Tomb agricultural school.
Coming to the coast by well-known summer resorts like Saltnes and Onsøy. From Onsøy church again inland till they’ll cross Norway’s largest river Glomma on road 109 between Fredrikstad and Sarpsborg.
The course turns directly north to Grålum and a new crossing of E6 before entering the city of Sarpsborg and the final three laps. A well-known finish line just by the town hall of Sarpsborg, this finish also used in 2021. 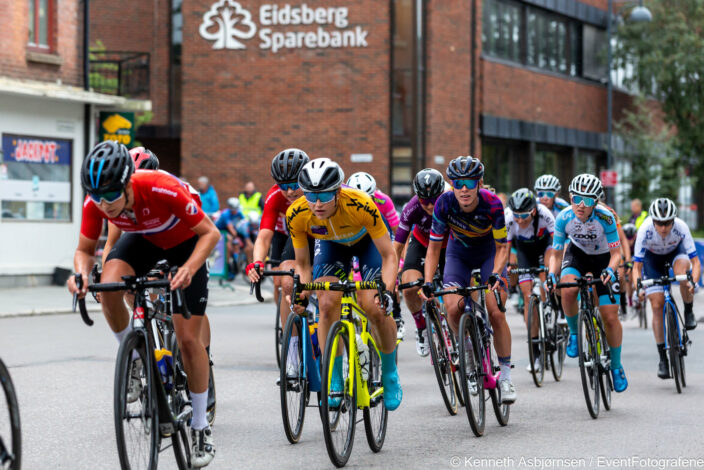 Crossing around in the inner parts of Østfold. Just like in the Ladies Tour of Norway last year, but not the same course. The start once again in Askim and the finish at Mysen where they’ll also come through earlier on the stage.
Slightly hilly terrain without the biggest climbs. This has proved to be enough to split the peloton before. And the one final lap also has a fairly tough climb that can make a difference.
From the start in Askim they’ll go through Trøgstad on the way to the first sprint in Mysen. Then a loop in east and south east direction through Slitu, Skiptvet, Mørk golf course, Spydeberg and Vamma power station where they’ll cross the river Glomma twice.
At the end there will be one more loop to the north through Trøgstad and back to the final lap at Mysen where the finish is in a slight uphill.

The Queen stage with the final climb to the finish at Norefjell will probably decide the GC in the race. The start will be in Vikersund where they’ll also come through after a first lap.
The ladies will pass the World’s biggest skiflying hill (Vikersundbakken) just after the start and also on the second lap. The lap goes south to Åmot and just outside Blaafarveværket and Koboltgruvene, two of the most visited places in the area.
On the second lap they’ll continue on road 287 through Simostrand and the statue of the ”King of Biathlon” Ole Einar Bjørndalen who comes from here.
After having passed the lake Soneren they’ll turn north towards Sigdal motor center och further to the lake Krøderen. They follow this lake till Noresund where the climb to the finish starts.
On this 10 km uphill the Olympic TT-champion Annemiek van Vleuten made the move that gave here the overall victory in the Ladies Tour of Norway in 2021. The climb is steepest up to the Norefjell Skisenter but it flattens a little bit on the final kilometer to the finish next to Norefjell Ski & Spa.

The city of Lillestrøm just east of Oslo is the starting place for the final stage of 153,4 km. The route follows road 22 through Fetsund and south next to the lake Øyeren. At the old border between the regions Akershus och Østfold they turn east and after Hemnes they’ll hit the border village of Ørje where they’ll cross highway E18 between Oslo and Stockholm.
From Ørje the ladies will have the beautiful view of the lakes in Haldenvassdraget on their way south to the finish. They’ll be able to see both Øymarksjøen, Aremarksjøen, Asperen and Femsjøen, all beautiful lakes in fantastic Norwegian nature.
The finish will be by the inner harbour in the border city of Halden. This is where the Ladies Tour of Norway was born and it’s the center also for Tour of Scandinavia. Normally the final gathers big crowd and there are often a lot of drama here. The final three laps are technical and difficult. 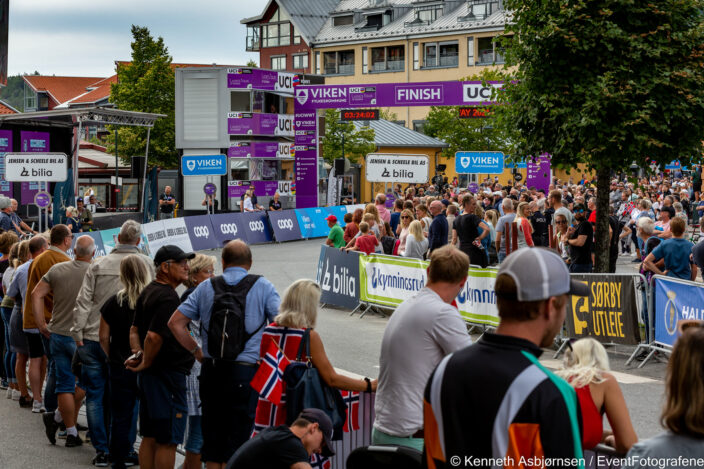