Sunday’s third- and final stage of the LToN will in no way be any rest day for the riders. The 154 kilometers from the old Svinesund bridge between Norway and Sweden to the finish in Halden is the ”King stage” – or here maybe the ”Queen stage” – of the race.
A lot will be da capo from last years final, but the final circuit in Halden is different and will be new to the riders.

The stage moves out and in of Sweden several times and with the start at the border this is also something special for this day. The first parts goes south to the city of Strömstad and the first KoM is at Daftö Camping just south of the holiday city in Sweden. 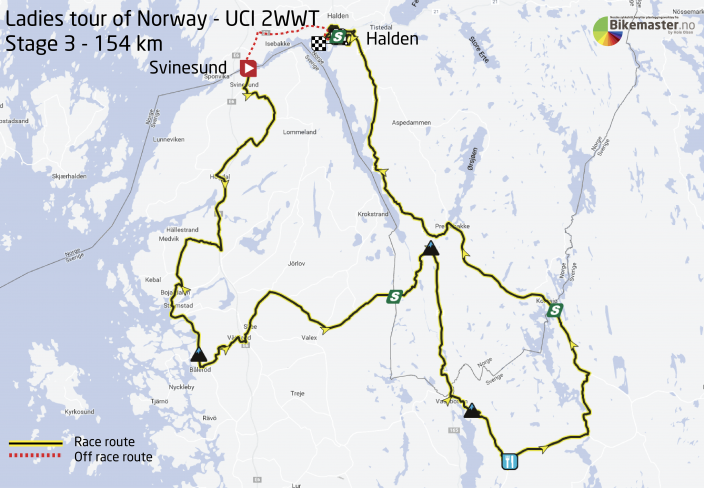 When the riders are heading inland after this the terrain gets more undulating. The race is coming back into Norway after 53,4 km. On this stage there is also a special border jersey to fight for. It will be decided after the two border passages after 53,4 and 97,5 km.

There are two more KoM sprints – one in Norway and one in Sweden. The first one at Glende after 59 km is not very hard. The average climb is only 3,5 % over 2,2 km. The last KoM in Sweden is just after the riders have crossed the border again by Vassbotn. The hill up to Stabäckehult is 1,6 km with 4 % average climb.

More difficult is probably the 7 km gravel road to follow on Swedish ground. When this is finished the riders will follow the road between Ed in Sweden and Halden on the way north to the finish. They will cross the border at Kornsjö and also make a small turn through the fortress at Fredriksten before entering the center of Halden.

The final laps around Rødsberget showed themselves to be tough last year and even though they are different this time they can be crucial. This is also the longest stage of the race. The sprint itself is a few meters shorter than last year and a little more narrow.
One year ago it was Megan Guarnier who just outsprinted Marianne Vos and Ellen van Dijk for the stage win.